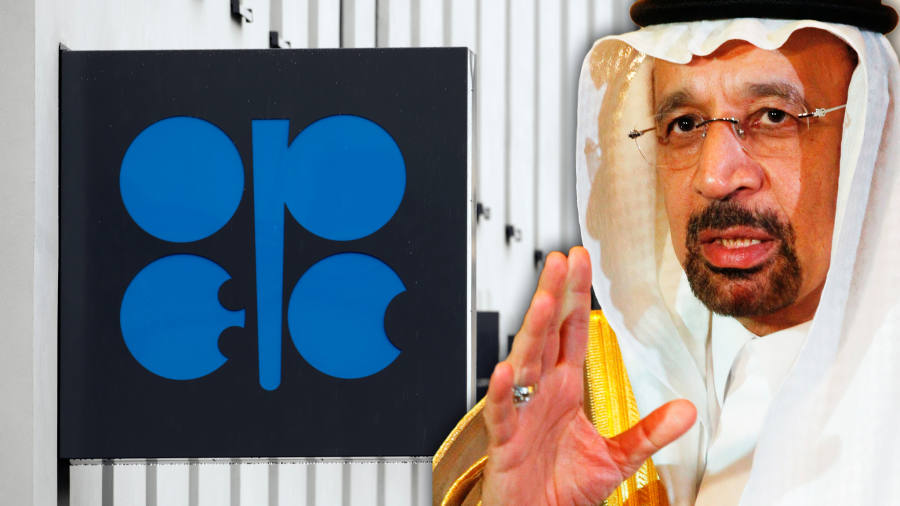 The comments come as fraught US-Iran relations, attacks on the kingdom’s oil infrastructure and volatile supplies in big producer countries have put energy investors on alert.

“The market is in a delicate situation,” said Khalid al-Falih on Sunday ahead of a meeting of oil officials in Jeddah to discuss the effectiveness of a deal between Opec and Russia to curb output by 1.2m barrels a day.

“On the one hand there is a lot of concern, and we acknowledge it, about disruption and sanctions and supply interruptions. But on the other hand, we see inventories rising [and supplies are] plentiful,” Mr Falih said.

Mr Falih spoke ahead a formal ministerial meeting in Vienna next month when officials will decide whether or not to maintain these curbs that have been in place since January and exceeded expectations.

They were originally intended to stop oil stockpiles from swelling and to alleviate a drop in prices. Brent crude, the international oil bench which fell to $51 a barrel in December, has since risen to above $72 a barrel.

But Mr Falih told reporters that oil stockpiles around the world were still rising. “My recommendation to my colleagues will be to drive inventories down,” he said, adding that a final decision would be made in June.

Mr Trump has repeatedly called on Opec and its defacto leader Saudi Arabia to release supplies into the market and keep oil prices in check, as the full impact of US sanctions on Iran’s economy and energy exports is felt.

The kingdom’s production dropped to around 9.7m b/d in April, which is down around 1m b/d from levels reached at the end of 2018.

Oil ministers are meeting as Saudi Arabia and its Gulf allies have backed the US’s more aggressive foreign policy against Tehran, sparking fears of a military conflict in the region.

Adel al-Jubeir, Saudi Arabia’s state minister for foreign affairs, said on Sunday the kingdom would do all it can to prevent a war.

“But if the other side chooses war then the kingdom will respond with full force to defend itself and its interests,” he added.

A “sabotage” attack on commercial ships off the coast of the UAE included two Saudi oil tankers. Then a drone assault on two pumping stations along a pipeline in the kingdom has raised concerns about supplies from the world’s biggest oil exporter.

Saudi Arabia’s King Salman has invited Gulf and Arab leaders to convene emergency summits in the holy city of Mecca at the end of month to discuss the implications of the attacks. Investigations are ongoing into the vessel incident while the kingdom has blamed the drone attack on Iran-backed Yemeni Houthi rebels.

Volatile supplies elsewhere — notably in Venezuela which is also under US sanctions — unrest in Libya and oil contamination in an export pipeline in Russia are adding to anxieties.